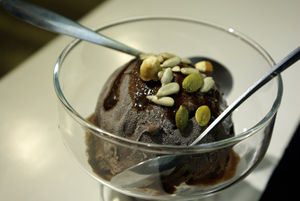 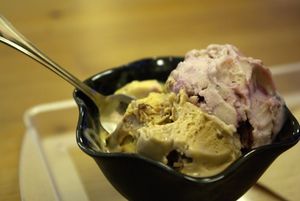 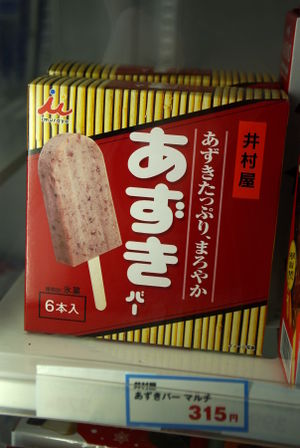 A box of azuki bean ice cream in Japan.

Ice cream is a frozen dessert.

Most commonly it is made out of cow's milk and therefore is not vegan. Fortunately, ice cream can be also produced by using plant milk (soy milk, oat milk, rice milk, coconut milk), or simply out of frozen fruits or juices. There are many types of such vegan ice cream. They are especially popular in Western European and North American countries, and can be bought in supermarkets as well as in gelato places.

Ice cream is produced by making a base out of soy, or some kind of other plant milk (or a mixture of them), and adding flavoring ingredients, such as vanilla, cocoa, berries, etc. The whole mixture is then frozen while mixing it at the same time.

Ice cream can be easily made at home if one has an ice cream making machine that does both freezing and mixing. An alternative is to freeze ice cream without mixing and then soften the resulting block by cutting it with a food processor or blender.

Soft and creamy ice cream can also be easily made by freezing peeled and cut into pieces bananas for 5-6 hours. They then have to be blended.

Try these recipe books to get detailed instructions how to make vegan ice cream at home: