Joaquin Phoenix boldly used his acceptance speech while accepting his first Oscar at the Academy Awards on FEB 9 2020, to talk about animal rights. specifically against the cruelty of the dairy industry. 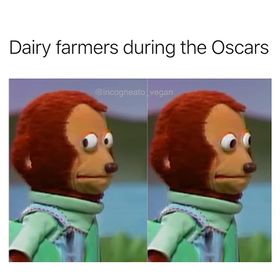 God, I'm full of so much gratitude tight now. and i do not feel elevated above any of my fellow nominees, or anyone in this room; because we share the same love, the love of film. and this form of expression has given me the most extraordinary life. i don't know what i will be without it.

but i think the greatest gift that it's given me, and many of us in this room, is the opportunity to use our voice for the voiceless.

I've been thinking a lot about some of the distressing issues that we are facing collectively, and i think at times we feel, or we made to feel, that we champion different causes. but for me, i see commonality.

I think that we’ve become very disconnected from the natural world, and many of us, what we’re guilty of is an egocentric worldview, the belief that we’re the center of the universe, We go into the natural world and we plunder it for its resources, We feel entitled to artificially inseminate a cow, and when she gives birth we steal her baby, even though her cries of anguish are unmistakable. And then we take her milk, that’s intended for her calf, and we put it in our coffee and our cereal. and i think we fear the idea of personal change, because we think that we have to sacrifice something, to give something up. but human-beings at our best, are so inventive and creative and ingenious; and i think that when we use love and compassion, as our guiding principles, we can create, develop and implement systems of change that are beneficial to all sentient beings and to the environment.

Animals Are the Real Winners, Thanks to Joaquin Phoenix’s Oscar Speech

Joaquin Phoenix winning Best Actor for playing the Joker fits him to a T because his comments would have been laughable were they not so offensive. Phoenix’s rambling remarks about America’s dairy industry prove how out-of-touch he is with the hardworking Americans who grow our food and create healthy communities. Phoenix’s Hollywood-elite world view has clearly blinded him to the sacrifice and struggles of America’s dairy farmers. When I travel Pennsylvania’s 12th Congressional District and meet with farmers, I am always impressed with their work-ethic, thoughtfulness, and desire to help others despite facing generational industrial hardships and a libelous onslaught from anti-dairy activists. The callousness he showed in his speech last night proves he needs to get out of his Hollywood bubble to see how real Americans make a living. His remarks were detestable not just to me, but to the many hardworking family farmers across Pennsylvania’s 12th Congressional District with whom I speak with on a regular basis

If he studied the commitment of dairy farmers to animal welfare and had a fuller understanding of the contribution of dairy products to a nutritious diet, especially for children, he might have a different perception of the value that dairy contributes to global health and the importance of the dairy sector to global livelihood