Taiwan is an island country in East Asia, close to China, Japan and the Philippines. It is one of the most vegan-friendly countries in the region for several reasons. First, in Taiwan veganism and vegetarianism is widely accepted, because many people practice such way of eating if not all the time then at least during some days because of religious reasons. Second, food labelling in Taiwan is very detailed with separate labels for lacto-vegetarian, ovo-vegetarian, lacto-ovo-vegetarian, buddhist-vegetarian or vegan foods. Finally, one can easily find vegan and vegetarian restaurants or simple street stalls even in smaller cities. Taiwan is especially good for mock meat fans as one can buy seitan or soy meat in almost all supermarkets. 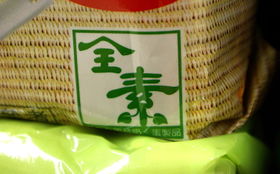 After food scandals in 2009 when real meat was found in some "vegetarian" fake meat products, Taiwanese government mandated that all food marketed as vegetarian has to be labelled with specific labels. There are five types of them. The main Chinese character than one has to remember is 素 (su) which means vegetarian. Combined with it can be five other characters:

全素 usually means vegan, but double-checking is advised as Buddhists sometimes eat dairy products and food labelled with 全素 may contain them. 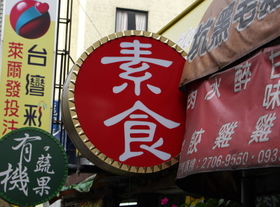 A sign outside of a restaurant in Taipei saying 素食.

Most vegetarian/vegan places in Taiwan have characters 素食 written somewhere outside that mean "vegetarian food". It does not mean that such places sell vegan food but in many cases they do.