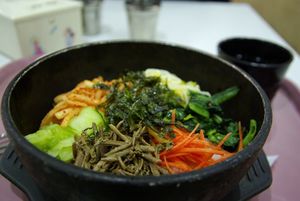 Seoul is the capital of South Korea. It is a vegan friendly city with many vegan restaurants, things to buy in supermarkets, and cheap fruit and vegetables in street markets.

Eating out in non-vegan places can be challenging as quite few people working there understand the concept of veganism or vegetarianism. Be aware that even vegetable dishes can be made with fish or meat stock, or some sea animals. Therefore, when dinning in non-vegan restaurants it is very useful to be able to speak at least some basic Korean. If you can't do that, it is a good idea to go with someone else who can. Otherwise, it's better to stick to vegan places that are scattered all around the city.

Loving Hut is the most popular chain of vegan restaurants in Seoul. They serve many vegan versions of traditional Korean dishes, and are good places to try Korean cuisine.

Buying things in supermarkets that have many ingredients will require you to read at least some Korean. Food packaging very rarely have ingredient list in English. The list of the most common non-vegan ingredients can be found in South Korea's page.