'''Veganwiki.info''': community project to create the biggest resource for and by vegans and vegetarians under a free license.
Revision as of 14:16, 11 May 2013 by Linas (talk | contribs)
(diff) ← Older revision | Latest revision (diff) | Newer revision → (diff)
Jump to: navigation, search 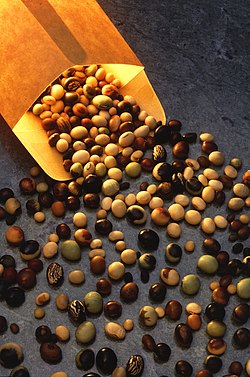 Soybeans (or Soya beans) are legumes grown in many countries around the world. Soybeans are rich in good quality protein, minerals and vitamins. They have been used for food for centuries in East Asia. However, the large majority of soybean crop nowadays is not consumed directly by humans, but rather is used as an animal feed.

Soybeans are very popular among vegetarians and vegans because of their nutritional qualities and versatility. Soybeans can be turned into a variety of products, such as tofu, soy milk, tempeh, soy meat, miso, soy sauce, edamame, natto and others.

The effect of soy foods on health is considered to be controversial because of some conflicting studies. On the positive side, there is a strong link between eating moderate amounts of soy and reduced risk of prostate cancer, breast cancer, and increase in cognition. On the negative side, soy foods should be limited for those who have hypothyroidism as soy affects thyroid hormone. The phytates in soy also lower absorption of calcium, zinc and iron, however, that is not a problem if soy is consumed in moderate amounts. On the neutral side, there is no evidence that soy formula has any effects on infants, or that it interferes with male hormones. In short, soy is certainly neither a miracle food nor something to be banished. It should be used without excess in a varied diet.

Some people are also concerned that soybean is one of the most common genetically modified plants in the world. Although there is no information that GMO soy can have adverse effects on human health, those who do not want to consume GMO can easily find non-GMO soy products. Most vegan foods made out of soybeans have labels that inform about the type of soybeans used in production.