'''Veganwiki.info''': community project to create the biggest resource for and by vegans and vegetarians under a free license.
Revision as of 14:07, 17 April 2013 by Sigurdas (talk | contribs) (removing info and linking to other sources which have reviews and ratings as well as are updated frequently)
(diff) ← Older revision | Latest revision (diff) | Newer revision → (diff)
Jump to: navigation, search 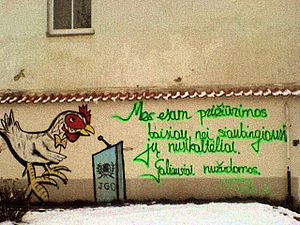 Vilnius is the capital of Lithuania. It is fairly easy to be a vegan here: even though many still won't know what veganism is, you have a variety of vegan-friendly shops and cafés to choose from. Besides, you will have no problem finding plenty of various fruit&veg in ordinary grocery stores.

In general, there is a feeling that veganism is on the rise in Vilnius. Just 10 years or so ago, it was hard to find a vegetarian place in Vilnius - now there is plenty to chose from, including ordinary restaurants which started labeling vegetarian or even vegan dishes.